Children of the Eucharist

Let the little children come to me – Matthew 19:14

As part of the formation of our COTE Leaders, we began running 40 Hour Adoration Retreats in November 2017. As we live in such challenging times, the theme of the first 40 hours retreat was to pray “in reparation for the Soul of our nation”.

It was a truly powerful, uplifting weekend of prayer, praise, worship and devotion, made before the Blessed Sacrament in solemn exposition for 40 hours, led by our Spiritual Director Fr. Lawrence Joseph CFR.

The number 40 has always signified a sacred period of time: the rains during the time of Noah lasted 40 days and nights; the Jews wandered through the desert for 40 years, our Lord fasted and prayed for 40 days before beginning His public ministry. The Forty Hours Devotion remembers that traditional “40-hour period” from our Lord’s burial until the resurrection.  In the Middle Ages, the Blessed Sacrament was transferred to the repository, “the Easter Sepulcher,” for this period of time to signify our Lord’s time in the tomb. 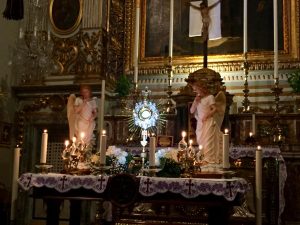 A very special addition to our first 40 hours retreat was a beautiful holy hour for children.  Approximately 25 children and young teens gathered to adore Jesus in the Blessed Sacrament, led by Antoinette.  Before they left. Fr. Lawrence blessed them with 1st class relics of St.’s Jacinta and Francesco Marto of Fatima.

The 40 hours Adoration retreat not only nurtured all who attended and nurtured our love for our Lord in the Blessed Sacrament but, a huge amount of prayer was dedicated to the protection from evil and temptation for our country; the reparation for the sins of our nation and for the poor souls in purgatory; and deliverance from political, material and spiritual calamities for which, there are so many in these times. We truly implored the Lord to pour forth His abundant graces not only for own personal needs, but for those of the whole country.

The first 40 hours retreat was so powerful and grace-filled, we have since led a further three 40 hour retreats in Our Lady’s Shrine in Knock, Co. Mayo during 2018 and most recently we led another 40 hours retreat in the Church and Monastery of St. Peter, a Catholic Benedictine monastery, located in the medieval city of Mdina, in Malta which, was another equally blessed and beautiful experience with the Lord. 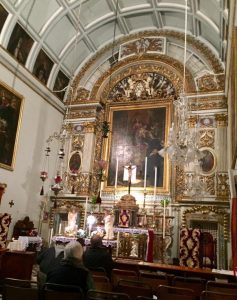